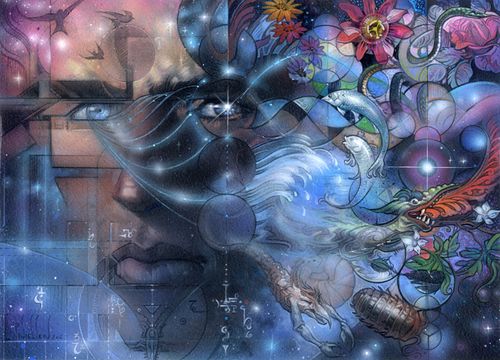 Whenever a new "art assignment" for Magic the Gathering appears in my inbox (or in the old days, my fax) I immediately stop whatever I'm doing and read it. I can't stand the suspense, and need to know immediately what I get to illustrate for the next set. Throughout almost two decades (18 years to be exact) of illustrating for MtG, there has only been a few occasions, in which I get to the end of the description and say, "SERIOUSLY…?!!" "Are you kidding me?!" "I'm an artist not a miracle worker!!" It was one, or maybe all three of these phrases which adhered to my frozen, wide-eyed stare. Please, go ahead and read it and tell me what you think.
Title: [Enter the Infinite]
ART DESCRIPTION:
Color: Blue spell (unguilded)
Location: Unimportant
Action: Show a close up of a face that has just received all the knowledge in the universe. The expression is that of seeing the immensity of the infinite that both awes and terrifies. It is agony and ecstasy at the same time. At the edges, the face is beginning to fracture into geometric pieces, and the further out from the face that we go, the pieces are turning into all manner of birds, beasts and creatures that wriggle and crawl, flowers, trees, vines and symbolic script. The pieces are spaced more and more apart the further they are from the face as if the face is exploding apart revealing the infinite void.
Focus: The fracturing face.
Mood: Identity dissolved in infinite knowledge.
Notes: Terese, this is a powerful card that lets you draw your entire deck… you can cast anything! Please make it appropriately impressive and dramatic!
No pressure, right? In general, I'm pretty quiet about my approach, especially with pieces like this. Because even to me, the process can sound a bit woo woo. But since many of you asked, I'll attempt to share. Feel free to roll your eyes at any point necessary.
Sometimes I'm given assignments in which I'm specifically told to handle the imagery in an abstract way–to stay away from realistic, straight forward approaches. For me, that means commence the weaving, layering and merging of elements in a diagrammatical, fluid, textural, and symbolic way… or something like that. When going this route with an illustration my intent is to inject the imagery with thoughts and symbols in an ethereal, esoteric way, creating a visual that I hope will reveal itself to viewers in their own personal ways. 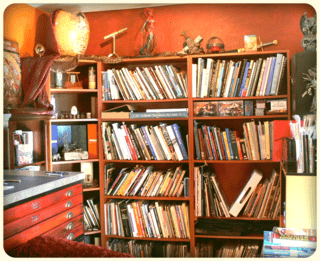 Regardless of the art assignment, I always start by highlighting words and moods that are key in the description. This creates a visionary springboard and framework for designing the image. After reviewing the highlighted description, I nestle myself amidst my personal library, listening to which books whisper into my ear. Sometimes I'll follow that up with a bit of surfing around on the internets to see what else falls into my lap. I allow what I find in these places to simmer and percolate with the art description for a time, paying close attention to faint or bold nudges which drop in from the aethers. I would suppose this process is about as close as I get to meditation, only my eyes are open, a pencil is in my hand and an amorphous something, from some confluence of happenings, funnels through.
Just for the record, I can't say that I've ever experienced, nor have I observed anyone, that has just received "all knowledge in the universe". I think the closest I've come to that is balancing my check book the first time through. In any case, if depicting someone receiving "all knowledge in the universe" is not complex enough, let's also tack onto that "awe and terror" and "agony and ecstasy" all into one expression. Right?!

So I decided early on in the process, since the face and expression had to do it's best to depict these incongruous and complex emotions, as well as convey being "a part of" the Universe while simultaneously "exploding apart"– for this to be readable whatsoever, the face would need to be a major aspect of the painting, especially at the printed 2 x 1.5" MtG card-art size.
I counted on the eyes in the painting to say a great deal; one eye (his right) looking awestruck and his left radiating a confident, all-knowing, spark of enlightenment. The face itself was an amalgam of idealized male features which I purposely forced into even more exaggerated geometric angles as they pushed their way out towards the left of the image. Woven behind, in front of and within the picture are 2D representations of patterns, sequences and phi ratios–proportions that permeate our physical and unseen worlds. I'm a complete novice at understanding these things. But lest you think I'm too far off the deep end, Leonardo has pages of sketchbooks depicting explorations around this, and he seemed to know a thing or two. 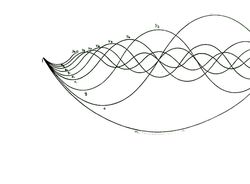 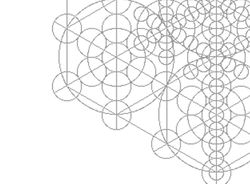 I felt "Enter the Infinite" needed to have a connection between the enlightened soul in his eyes with the flower of life blueprint–the essence of all organic life. I positioned the phi ratio wave to extend from his eyes to the right of the piece merging with the flower of life symbol. This provided a geometric backdrop in which to morph and entwine all the other elements.

I've been told many times that my work has a fluid, dance-like, lyrical quality to it. I believe movement and motion is what makes us feel alive. Obviously when we stop moving, and breathing, and growing, we're lifeless. So intuitively I sprinkle movement into the flow of my compositions, choreographing the dance of ones eyes along the pirouette of the lines. Almost anything can be elevated into a graceful line. This can be through the sweep of hair, fabric, blowing leaves, or arching waves.
From the book "The Unknown Leonardo" we learn of his appreciation and attention to twirling, graceful motion.
"Whirling movements of every kind fascinated Leonardo. He likened the eddies of whirlpools, which he called 'the cosmic breathing of the ocean', to the 'lake of blood extending through the human body'. He saw a parallel between water and hair. 'Observe the movement of the surface of water' he wrote, 'how it resembles hair, which has two movements, one of which comes from the weight of the hair the other from the curves of the curls. Thus water has its whirling curls, some of which follow the rush of the main current, while others have a movement of incidence and reflection'." 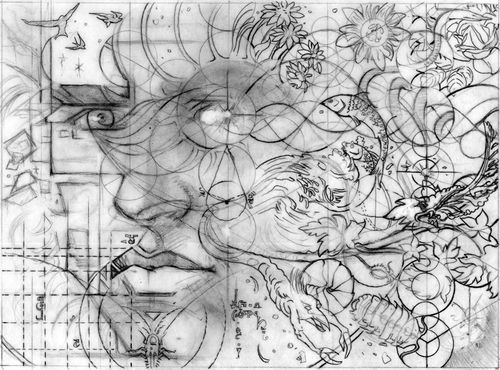 Some illustrations require numerous thumbnail compositions. However, for images such as: Enter the Infinite, Descendants' Path, Lifelink, Silvercoat Lion, Nature's Spiral, Call to Mind, Silverskin Armor, Legacy Weapon, Holy and Unholy Strength and other's in this vein, I find or shoot reference for the, one or two main elements. I then position those pleasingly into the rectangular, Magic card format, and then draw, design, and doodle away. Sometimes it requires a fair amount of erasing and massaging things around, until a fluid mosaic within the piece as a whole, is achieved. Compositionally, I think about the various elements much like the old school montage approach to designing a movie poster. Start with the largest focal point element and then design all else around that.
For example:
Enter the Infinite: Start with the face and the two patterns, and morph all else into that.
Descendants Path: Begin with the girl and the tree and work all other aspects around that in a way that enhances and surrounds the subject.
Lifelink: Arrange the hot dude and various shifting angles of the lion head, and then work in all the other elements to "link" and unify the man and lion together.
When choosing a color palette for Magic card art, if the card represents a certain mana color, then (as directed in the styleguide) we're asked to "Approach each illustration with its color in mind. Hue is a strong, direct way to reinforce the card's color". It doesn't mean it has to be overwhelmingly that color, but at least a major color component within the piece. In the case of "Enter the Infinite", blue was the color of the spell. I kept it within the blue to purple range, as one might expect to see in photos of the universe and galaxies.
Though the project was definitely daunting at inception, I very much enjoyed the process of working with the various elements, and it's always interesting to hear what players think when they see cards like this.  Would love to have your comments here, or over on my Facebook Page.

For limited edition prints of this image click on over to the store.
Click these links to purchase the original art or sketch. 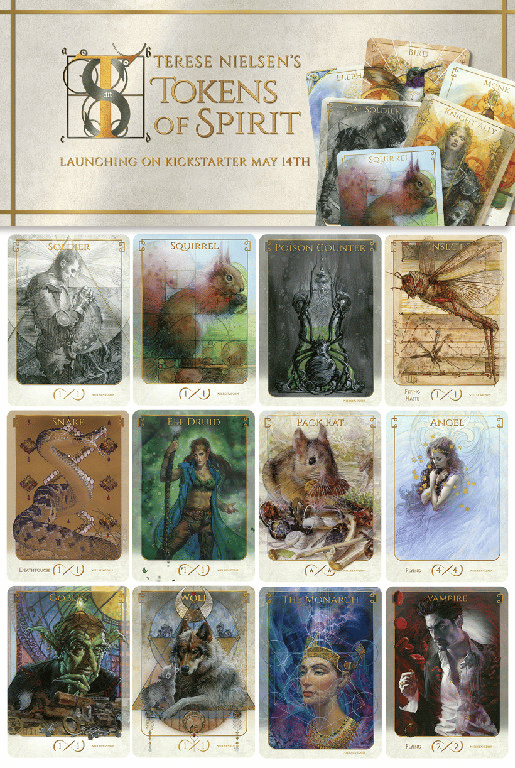 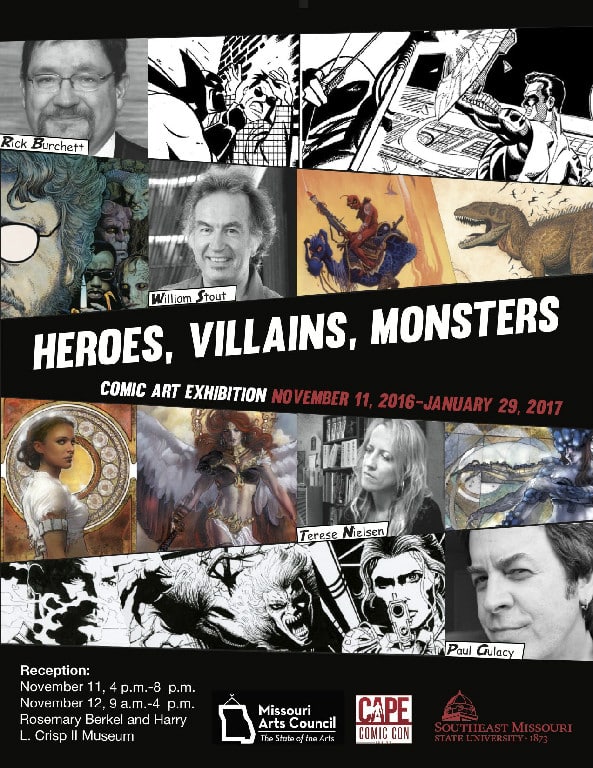 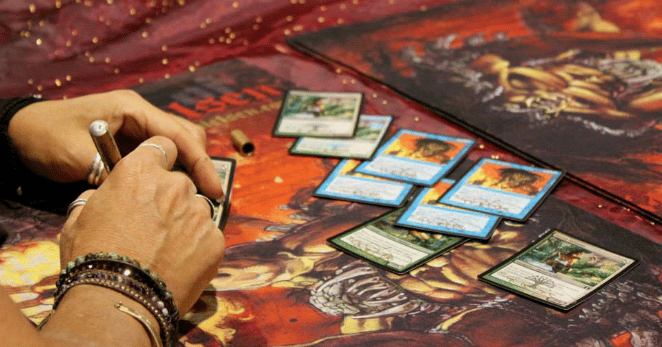